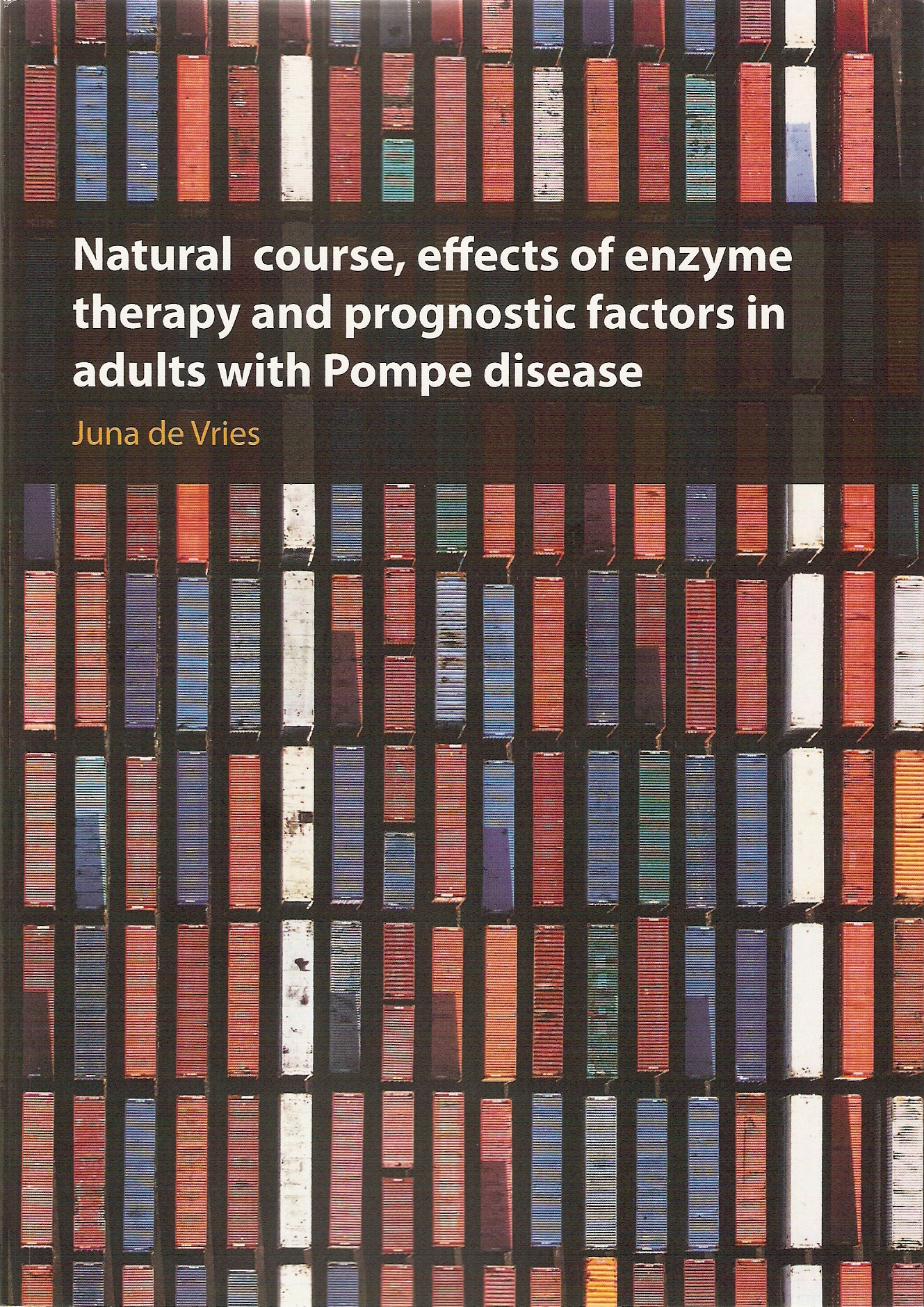 On June 10, 2014 Dr. Juna de Vries received her PhD on 'Natural course, effects of enzyme  therapy and prognostic factors in adults with Pompe disease' at the Erasmus University Rotterdam.

Enzyme replacement therapy (ERT) using alglucosidase alfa (Myozyme) is the first disease specific treatment fo an inherited neuromuscular disorder, which makes the situation for Pompe disease rather unique. Registration of ERT in 2006 was predominantly based on the positive results obtained from clinical trials performed in infants with classical infantile Pompe disease. Information on the effects and safety of the use of alglucosidase alfa in children and adults with Pompe disease was limited at start of the research of this thesis. For that reason, the Dutch nationwide prospective observational study on the natural course and the effects of ERT in children with Pompe disease started in 2004 at Erasmus MC. In addition, patient-reported information on handicap, quality of life and fatigue was gathered via the international IPA/Erasmus MC Pompe Survey where Pompe patients all over the world participated in.

The scientific work presented in this thesis is focused on the clinical manifestations, natural history, and the effects and safety of treatment with alglucosidase alfa in adult Pompe disease. The aims were to investigate:

The clinical manifestations, natural course and predictors for disease progression are described in a cohort of 94 patients with a median age of 51 years (range 25 to 75 years). Data were collected in the Dutch nationwide study. Skeletal muscle weakness was characteristically distributed in the limb-girdle pattern. Less well known features of the disease were far more common than previously thought, ptosis (hanging eyelids) occured in 23%, bulbar weakness in 28%, and scapular winging in 33% of the patients.

During the study, skeletal muscle strength declined with a mean of -1.3 percentage points per year (pp/y) for manual muscle testing and -2.6 pp/y for hand-held dynamometry (both P=0.02). Ten percent of patients declined unexpectedly fast. Longer disease duration and reduced pulmonary function were predictors of a more rapidly decline of skeletal muscle strength.

The effects of ERT as observed in the Dutch nationwide prospective study are described and contrasted to the natural disease course. In 69 patients with a median age of 52 years (range 26 to 76) muscle strength increased on average with 1.4 pp/y for manual muscle testing and with 4.0 pp/y for hand-held dynomometry over a median treatment duration of 23 months (both P<0.001).

It is demonstrated that 71 of the 73 (97%) adult patients develop antibodies to alglucosidase alfa. The mean titer peaked at 6 months to 1:1259 declining to 1:270 after 36 months of ERT. Individual titers and titer courses varied, but in the majority (93%) of patients titers decreased or stabilized with continued ERT. In vitro studies demonstrated that the higher the antibody titer, the more the activity of alglucosidase alfa was inhibited. The proved adverse in vitro effect was not reflected in the in vivo findings, as no clear adverse effect of high antibody titers could be demonstrated on clinical outcome. It was found that the risk on infusion-associated reactions increased with higher peak titers (P=0.001).

In this thesis also a case of pregnancy is described. A 40-year old woman with Pompe disease continued to receive ERT during pregnancy and lactation. A healthy boy was born at a gestational age of 37 weeks and 5 days after elective Caesarean section. There were no maternal complications and the child developed normally. Alglucosidase alfa was secreted into the breast milk at very low levels during the infusion, but 24 hours after start of the infusion the enzyme activity in the breast milk was back to the pre-infusion level. Based upon these findings, the continuation of treatment with alglucosidase alfa during pregnancy and lactation seems safe for both mother and child.

Excessive fatigue is frequently encountered complaint in patients with a neuromuscular disease. In this thesis the pathophysiological mechanisms of fatigue and its burden are reviewed with a focus on Pompe disease and Guillain-Barré syndrome. Prevalence rates of fatigue in neuromuscular disorders compared to the high levels of experienced fatigue reported in multiple sclerosis. Fatigue can be subdivided into experienced fatigue and physiological fatigue, physciological fatigue subsequently in central and peripheral fatigue. In neuromuscular disorders peripheral fatigue is an important contributor. Nevertheless, in reaction to the pathology in the peripheral nervous system, fatigue of central origin can also be an important protective mechanism restricting further damage (central governing model). Severity of fatigue seems to be related to disease severity, possibly with exception of fatigue occuring a monophasic disorder like Guillain-Barré syndrome. Fatigue in neuromuscular disorders can be managed by symptomatic treatment of the underlying disease, exercise and cognitive behavioural therapy.

In the IPA/Erasmus MC Pompe Survey the effects of ERT on experienced fatigue in 163 patients are reported. The follow-up included a median period of 4 years before start of ERT and of 3 years during ERT. Fatigue severity levels measured with the fatigue severity scale (FSS) remained stable at around 5.3 points before start of ERT. During ERT, a reduction in the average experienced fatigue was measured, as scores improved significantly by 0.13 per year (P<0.001).